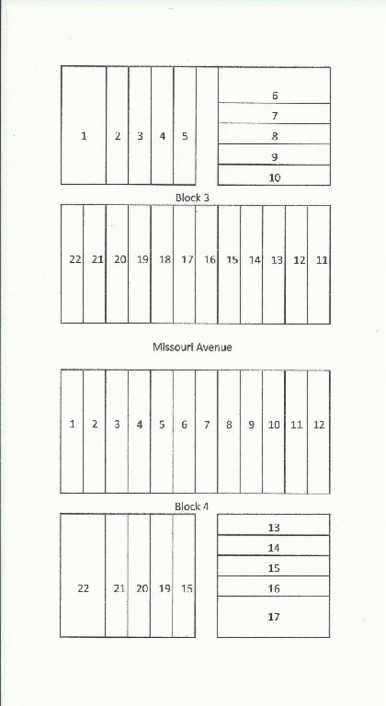 A plat map of Elmer is provided in the Elmer History section of this site.  It should be noted that blocks 3 and 4 became the central business district of the city.  The image below is a blowup of these two blocks and the following narrative describes where the early businesses of Elmer were located.

(The following is reprinted from the Elmer Centennial published in 1987)

Lot 1 was bought from the Santa Fe Railroad in 1890 by (Wes) Ferris.  Henry Miller bought it in 1893.  We do not know who built the "Hotel Elmer", but it may have been Louis Vor.  Myrtle Boyd ran it for many years.  John Wasell owned the hotel in 1909 and John Rice bought it in 1914.  It burned in the fall of 1914.  Rice sold the lot to Fred Mixon.  Other owners were G. Engleman, Frank Thomas, Wayne and Ruth Payton and Loren and Vera Mae Peavler today.

We know of no business places on Lots 2 through 10.

Lot 12 was originally sold to Myrtle Boyd in 1899.  W. A. McDavitt bought it in 1914 and probably rebuilt his store there.  T. L. Freed sold it to Swanson Smith in 1921 and he built the title building which still stands.  The M.F.A. was there for many years.  Gunnels and Howe own it now.

Lot 13 had Myrtle Boyd as the first owner.  It was owned by Charlie Herring in 1907, by Swanson Smith and W. H. McDavitt the same year and sold to F. L. Mixon in 1914.  It is thought that W. H. McDavitt built a general store there.  Lewis Perry built a gas station there in 1923.  The Elmer Light and Power Company owned the north half of lot 13 where the electric generator was located.  Rochel Hughes bought it in 1936.  Kenneth Elliott bought the station in 1946.  Deal and Manford Rhoades ran it from 1965 until selling to Leonard Allen in 1973.  Calvin Allen runs the station at the present time.

It is difficult to exactly trace the history of lots 15, 16, 17 and 18 as they were sold in so many combinations.  Lots 15 and 16 were owned by Brookshire in 1895.  It is thought that he built the first business, which could have been a general store or restaurant.  There was a general store there in 1911 when the three stores to the east burned.  In 1914, Lewis Perry had a harness shop and Paul Bailey also in 1916.  Willie Agee ran a hardware store there in about 1920, but closed it about 1933.  Widdel Biswell then bought it in 1939 and it was the movie house until Fred Laffin bought it about 1950 and ran a shoe and harness repair shop in the back part of the building.  Later, it was sold to Gunnels and Howe, torn down and replaced by the present metal building for the Elmer Farm Supply.

Lots 21 and 22 were originally bought by Vierhieleg in 1897.  They were sold to Clay Surbeck in 1901.  The Elmer Exchange Bank was completed in 1903.  It opened for business about April of that year, judging from old bank records.  J. M. Surbeck was the first president.  H. C. Surbeck became president in 1915.  The Elmer Post Office moved there about 1931 when the bank closed.  Fred Laffin owned it in 1954.  It was sold to Newton Haney that same year.  It was sold to Jim Gilbert in 1955 and to O. B. Davidson in 1958.  Alma Armstrong and Larry St. Clair bought it about 1969 and then sold it to Randy and Marsha Jones in 1985.  The Post Office was moved out about 1980 and the building was demolished a few years later.

It is known that Sally Tate ran a hotel on lot 1 block 4 about 1889.  This hotel was probably built by William Shores or S. L. Gash, who first owned this lot.  By 1890 the post office was on lot 2 and was run by Lizzie Surebeck, who was to later marry Tom W. McDavitt.

In 1889, W. J. Dale and son, bought lot 1.  They moved their general store from Mercyville and were in business on this lot by 1890.  This seems to show that the liffe of the hotel was short. Dale and son operated in the wooden building until the present brick building was built in 1910. About 1934, when Hemmit Dale and Ed Patterson closed their general store, Andy Lene bought the building and ran a general store and restaurant.  It was sold to Jim Mock in 1943 and then to Bernice Mock and Wendell Mathis about 1053.  It closed as a store about 1967.  Joann Burris, Goldie Cottrell, Gwin Simmons and Nell Allen ran a restaurant in the 1970's.  Eddie Gunnels and Harold Howe now own the place, which is empty and decaying.

Lot 3 was the original site of a general store built by Lee Dale or Henry Miller.  After burning, this wood building was replaced by brick and has since been a general store, a drug store and furniture store (F. L. Mixon), a restaurant (Andy Lene), another restaurant (Bert and Zora Tate), a tavern (Wacker and Freda Tate) from 1928 to 1983.  It ws then sold to Randy and Marsha Jones and it is now owned by Virgil and Jeri Brown.

On Lot 4, there has been a restaurant (Barn Baildy), tavern (Doll Magers, Henry McCollough, Bill Payton, a produce house (Wallace Leathers), a farm implement store (Herman Spencer) and is now a store room.

Lot 6, little is known of this lot until 1911, when T. F. Johnson rented the building from T. W. McDavitt and moved his barber shop there after his building burned.  His original building was located on block 3, lot 14.  That building burned along with L. W. Perry's harness shop and J. W. Gunnels general store in January of 1911.

Lot 7 was bought by Lizzie McDavitt from the Santa Fe Town and Land Co. in 1894.  It was in part: a post office until 1931 and afterwards a restaurant (run by Doll Magers in the 40's, by Mabel Elliott in the early 50's, and then by Ival Allen, Bea Nichols, and finally Maxine Hoffman). It also served as a home for several people.  The west half of the lot was Sam Parker's barber shop from 1919 until the 1960's.  Peggy Scott ran a beauty shop there for a while.  It is now owned by Harry and Hazel Fletcher, who ran an antique shop for several years.  It is now empty, except for some stored antiques.

Carlow Atteberry bought Lot 8 from the Santa Fe in February of 1901 and it was sold to T. I. and C. I. Murry in June of 1922.  T. I. build the drug store and ran it, along with his son Clyde, until it ws sold to Swanson Smith in 1948.  After Laura Smith closed it, there was a funeral home for a while, then a restaurant run by Nell Allen, Monell Koger and Donna Grigsby.

Lot 9 was bought from the Santa Fe by D. T. Galyen in April of 1897.  The lot was later owned by Cora Savage, Duke Atteberry and Jap Patrick until sold to Andy Lene in 1913.  Andy moved from his former location and opened a restaurant, fruit and notions store.  Lene sold to Reece Sooden and after several more sales, including one to Palmquist (a produce house), Jim Mock bought it and ran a general store until 1943.  He then bought lots 1 and 2 from Lene and relocated his store.  Mock sold lot 9 to J. D. Biswell in 1943, who sold to Boyd Coody in 1947 and a tavern was opened.  Between 1943 and 1946, Rex and Hazel Stanfield ran a grocery store until they relocated to Atlanta.  The following opened/operated a tavern that ran until the early 60's: Leonard Pike, Emery Lovinger, Rex Gates, Emmitt Dobbins, Harold and Minerva Gash, Carl and Martha March, Red King, Woodrow and Vi Carter and Oscar Herring.  Herring sold to Herman and Nellie Spencer in 1962, where they opened a Helpee-Selfee laundromat. The business closed in the 70's.

E. M. Nuhn bought lot 10 from the Santa Fe in 1899.  Andy Lene bought it in 1905 and built the present brick building.  He ran a restaurant there and was in business in 1909.  In 1923, T. W. McDavitt bought the building and sometime later, Linsey Buster opened a produce house.  John Griffin and Ralph Poston ran the business until the early 40's.  Fred Laffin then ran his shoe and harness shop until he relocated to the east half of lot 2, next to Mock's store.  For years the Cemetery Association held their Memorial Day dinners there.  The building is now owned by Herman Spencer and is used for storage.

Lots 11 and 12 were bought by Henry Miller and T. L. Freed in 1899 and the present building was constructed as a hardware and farm implement store.  Freed ran it until 1910 when he sold to W. J. Bailey who also ran a hardware store.  C. O. Drake moved his general store there in 1921.  It continued as such until 1970 when the contents were sold.  The building was later owned by Marvin Campbell (grocery store), M.F.A., Eddie Gunnels, Harold Howe and by Donna Schiff in 1987.

On the south half of these lots, C. O. Drake started the first phone company.  Sadie Drake ran it.  In 1907, the Elmer Journal published there and in the early 1930's, Nolan Peyton ran the print shop for Drake's store.

W.T. and D. L. Galyen bought Lot 13 from Ruben Barllett in 1891 and it was thought to have been the first Blacksmith shop.  Later it was an early print shop.  The phone company was moved there about 1916.  The present building was constructed about 1938 by J. O. Atteberry and became the citizens public service building.  Then E. O. Turner, Scott Gault, Cora Bonifield and Greg Scheff owned it.  The old exchange was replaced by the present dial phones about 1961. The switching building is now located on lot 14.

Lot 15 was the site of the feedmill.  Either John Roberts or John Urkuhart and Ethel Grubbs bought it in 1911.  Ivy Grubbs bought out his brother in 1921 and ran it until 1951.  The old mill was torn down a little later.