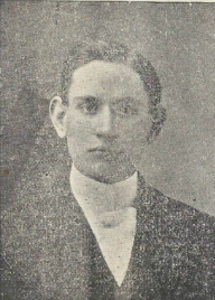 (Reprinted from the History of Macon County, 1910)

Unlike many of the young men born and reared in this section of the country who devote a considerable portion of their time in their earlier manhood to physical labor, Albert F. Smith of Elmer has been occupied mainly in intellectual work from the time when he left the academic shades amid which he completed his education. And while his engagements have involved a certain amount of bodily exertion, as all intellectual pursuits do, that part of his activity has been merely incidental, matters requiring mental effort forming the principal burden of his daily toil. That he has met his responsibilities in a masterly way and performed all the duties required of him with fidelity and ability is proven by his success in his career and the universal esteem with which he is regarded by the people of Macon county and the adjacent country.

Mr. Smith was born on January 2, 1880, at Clarence, Shelby county, Missouri, and is a son of B. F. and Beatrice (McAfee) Smith, the former a native of Virginia and the latter of Shelby county in this state. The father left his native state and came to Missouri in 1866. At that time the Old Dominion was a badly wounded giant, lying prone on the battlefield of the Civil war, with every energy prostrated and all strength for the time exhausted. Its once rich plantations were

largely in ruin, its industries were paralyzed, and all its civil and social

institutions were agonizing under the iron heel of a military despotism.

unconquerable. The subsequent history of the grand old state has given

abundant evidence of its recuperative powers, and commanded the

admiration of the world by the rapidity, vigor and excellence of their

work. Still the process of rebuilding was a painful and exacting one, and

obstacles born of the war, which levied heavy tribute on the depleted

cost of curing them. Under these circumstances Albert Smith's father

believed his chances for advancement would be better in a country

presenting fewer difficulties in the way of development. He therefore came to Missouri and located in Shelby county. This section, also, was wasted by the fraternal strife and had the prejudices incident to the contest. But its disasters had been neither so general nor so extensive, and it was comparatively a new country, with almost boundless resources which had not yet been developed. Missouri was not a towering giant of full maturity thrown down and crushed by superior force, but a young giant moving toward maturity with its progress temporarily checked by a passing storm.

The elder Mr. Smith chose wisely for himself and his offspring by enlisting under the banner of this growing potency. In the service and store-house of opportunity of the newer state he throve and flourished, working at his trade as a cooper, and through it becoming more than a mechanic working at a trade. He raised his business to the proportions and dignity of a manufactory, and by this means was of material service to the community of his home in supplying a portion of its wants. He was married in 1874 to Miss Beatrice McAfee, and by this marriage became the father of three children. His son Albert F. is the only one of the three who is living. His mother died in 1885, when he was a child of five years. B. F. Smith broke up  house-keeping at this time and Albert F. was taken by his grandfather A. S. McAfee at Clarence, Missouri with whom he made his home until May 1890, when Mrs. McAfee died leaving him again without a home. In June 1890, he found a temporary home with W. L. Thompson, near Anabel, one of the most extensive dealers of live stock in Macon county. Mr. Thompson became attached to the boy and decided to give him a home as long as he wanted it, also to give him as good an education as he could, sending him to the rural schools and one year each at Clarence High School and the State Normal.

At the age of eighteen Albert F. Smith began his career for himself still claiming Mr. Thompson's home as his home and always staying there when he was not employed.  In his own words : " It was the help and advice and fatherly interest manifested by Mr. Thompson that has enabled me to become what I am, and I certainly appreciate it."

Albert F. Smith began his education in the district schools of Macon county, continued it at a high school in Clarence and completed it at the Kirksville Norman school.

After leaving the institution last named at the end of a three years' course, he taught in the public schools for a period of seven years, passing two of them as principal of the schools in Elmer. In 1907 he became a stockholder and director of the Elmer Exchange Bank and was elected its cashier. This position he is still filling with great acceptability to the patrons and friends of the bank and to the entire satisfaction of its other officers. He is also secretary and treasurer of the Elmer Creamery Company, a member of the school board, and treasurer of the consolidated school district.

Mr. Smith's political faith is that of the Democratic party in whose affairs he takes an active interest and in whose behalf he is a faithful and appreciated worker. His fraternal connection is with the Independent Order of Odd Fellows, to which he renders good and loyal service as secretary of his lodge, and with the Modern Woodmen of America. He is also a zealous member of the Christian church, and its interests received his careful and helpful attention. In 1904 he was married to Miss Dora Salyer of this county. They have one child. their daughter Bertha. He and his wife are prominent in the social circles of the community and are looked upon as excellent citizens, warmly interested in everything involving the welfare of the community and willing at all times to do all in their power to promote it and add to the conveniences and comfort of its people.