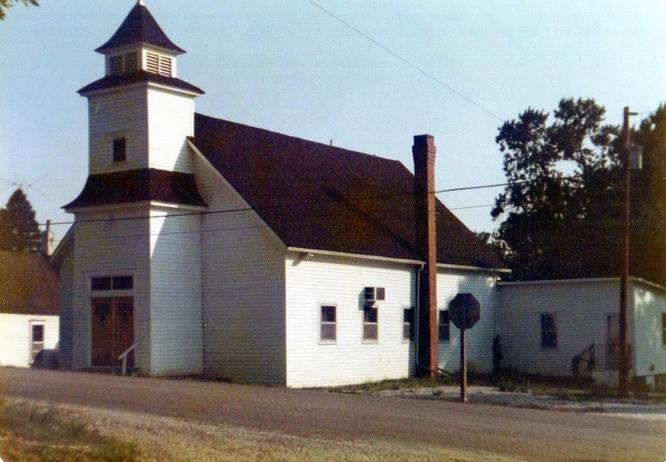 Land was purchased for the site of The First Baptist Church in Elmer from the Santa Fe railroad.  The erection of the building took approximately one year.  The timber for the framework was all native lumber. The lumber yard in Elmer furnished the rest of the material.  There were faithful and untiring efforts of those who worked and gave their money for the construction.  Mr. A. D. Banning was a carpenter who worked on the building.

Mr. Hemmit Dale was the first person to present himself to the church for baptism at its first meeting held on December 8, 1894.  The congregation was called to order with Brother J. W. Cook acting moderator in the chair.  When the invitation was extended to those who desired to unite with the church, 45 individuals went forward, with letters from Chariton Ridge, Chariton Grove, Goldsberry and Lone Valley.  A motion was made and carried that the church be called The First Baptist Church of Elmer.  Deacons were elected.  Brother Crouch was called as the first pastor.  The first baptismal service was held on May 12, 1895.  In August of the same year, a letter was prepared asking for admission into the Macon association.

Twenty-eight pastors served the church before the Rev. J. Eldon Johnson became the minister from May 1954 until July 1964.  During the late fifties, a basement was added to the building which provided kitchen facilities, rest rooms and classrooms.  An addition was added at the rear of the church providing classrooms and restrooms.  In 1958, membership was 170.  Clay Franks was superintendent of an active Sunday School and there were 15 Sunday School teachers.