Barnesville School distruct was located in Independence Township east of Elmer near the village of Barnesville. It was formed by the consolidation of Atteberry District and Osborne District in 1943 because of few students and lack of finances. Plans were made for a modern school house with a basement and electric lights. However, probably due to the expense of this new building, the Osborne school building was moved to the center of the district and was named Barnesville School.

The move was facilitated by the local community members. Two large caterpillar tractors were used to pull the building down the road toward its new location, but became mired down in the mud. The building sat there for two days, while conditions dried out, after which time the move was completed.  The Atteberry school building was sold and moved to Cooks Chapel Cemetery to be used for funerals and other neighborhood gatherings.

It began operation as Barnesville in 1943 with Wilma Thurman as teacher.  Some sources indicate that the first teacher was Sarah Grace Epperson, but it is definite that she taught there from 1944 until 1950. From 1951-1953, Barnesville students were transported. In 1953, it again operated until 1956.

In the fall of 1955 the building and all of its contents were destroyed by fire. The origin of the fire was never determined, but most thought that it was caused by an explosion of the stove. Seventeen pupils were enrolled in the sschool at that time with Mrs. Darlene Thompson as teacher. The term of school was finished out in the Atteberry building. Books and desks were borrowed from Murry School which was already closed. Students were again transported from 1956-1958 when Barnesville annexed to Atlanta. Mrs. Thompson was the last teacher at Barnesville.

Return to Our Schools 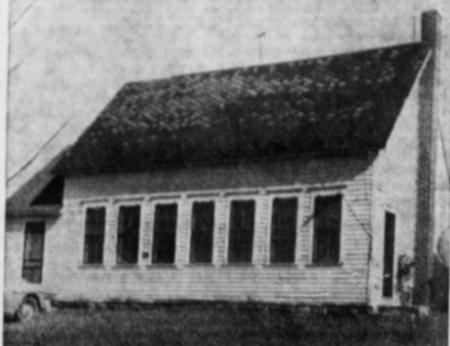