The first clerk was T. F. Agee, followed by J. F. Story, R. N. Leyde, and Clark Herrin. Among the first moderators were: J. T. L. Branham, G. C. Sparrow, Captain G. D. Elliott, and J. S. Butler. The first messengers sent to an association were: J. F. Story, Daniel Black, J. H. Agee, and G. C. Sparrow. The place of meeting was at the Rock Creek Church in Knox County in 1866. Under the same roof, located near the spot where Cook’s chapel used to stand, the Baptist and Methodist congregations worshipped at monthly intervals. This building was often spoken of as :Quail-trap meetin’ house”. The first protracted meeting was held in this place. It began in December 1866.

Old records tell of the Church’s struggle for existence. The present and original building located about six miles southeast of Elmer. It stands today, a monument to the consecration of early Baptist pioneers. In 1957, a remodeling program was undergone, making five classrooms for the convenience in serving the Sunday School. In 1965, a vestibule was built on the front of the church. Then in 1969, a wing was build on the south side of the church containing three classrooms, a recreation room, a kitchen and restrooms. All the projects were completed with donated labor.

Having been members the longest are: Mrs. Ola Butler, 62 years; Miss Nina Cherry, 56 years; Eugene Corcoran, 52 years; and Mr. and Mrs. Johnny Wiggans, 51 years. At present the church has a pastor who lives on the field with services twice each Sunday. The pastor is Rev. Dennis Watts. The deacons are Robert St. Clair, Charley Colman, Derle Henry, and Eugene Corcoran. The clerk is Mrs. Pat Henry. 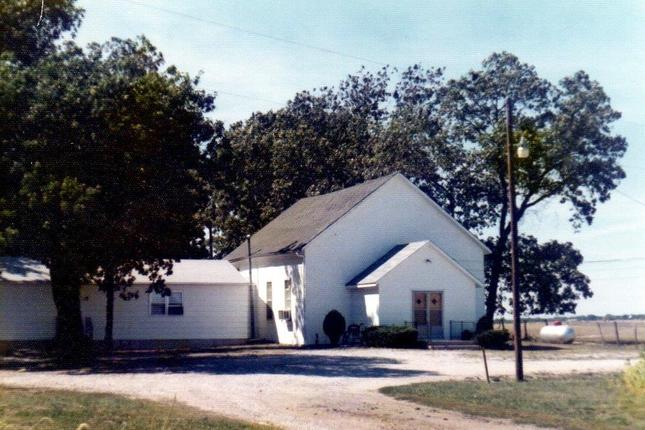