(Reprinted from Elmer Centennial, 1987, original date of the writing is unknown)

Many persons shut themselves off from greater goods and happiness because their mind is closed to new ideas and they resist changes and new experiences.  If everyone felt this way through the ages, there would be no growth or progress in the world, in our life, in our love for our fellow man.  If no one had had the vision and courage to accept new challenges, we would not have all the things that contribute to our happiness in life today.  This challenge and the love that Jesus Christ felt for mankind was felt by a group of 19 loyal Christian people, who in July of 1907 met and organized the Elmer Christian Church.  These charter members were Mr.  and Mrs. John Urquhard, Mr. and Mrs. I. F. Johnson, Mr. and Mrs. J.W. Herring, Mr. and Mrs. William Griffin, Mr. and Mrs. William Johnson, Mr. and Mrs. George Lynch, Mr. and Mrs. Dan Griffith, Mrs. A. F. Smith, Mrs. David Galyen, Mrs. B. F. Blackledge, Mrs. John Flynn and Mrs. Sally Brown.

Before they organized, they worshipped in the Universalist Church.  Services were conducted by Elder J. W. Davis of Kirksville.  After they organized, they worshipped and had Bible School in the opera house.  It was decided an evangelistic meeting would be held by Rev. Alfred Munyon.  The meeting was Pleasing in God’s sight.  The opera house wouldn’t begin to hold all the people.  They came from far and near to worship and sing and visit – and when it was over, 45 names were added to the church roll.  Here too, plans were made for building a church house.  The first step toward this goal was made by Brother John Urquhart who donated the lot on which the church now stands.  Carpenters were hired, Mr. Snyder of Marceline being the contractor and Leo Hunsaker helping him.  This was in the spring of 1910.  All the native lumber used in our church was furnished by T. L. Freed, Dan Griffith sawed it, J. H. Miller and Harry Prentice hauled it from the mill.  Members and friends helped the carpenters on the building.  Some helping were Pearl Johnson, Coolie Carter, Bill Gupton, Jimmy Cook, George Johnson, Dan Herrin and many others.

Many members have been enrolled on our church register.  Our church record shows 100 active members and through the years, a total membership of 425 of which we are very proud.  In the past 50 years, the church has had its ups and downs, but we were fortunate to have Elders and Deacons like T. L. Freed, A. F. Smith, B. F. Blackledge, C. N. Clinkenbeard, C. O. Drake, D. A Drake, G. N. Meeks, F. A. Perkins, J. O. Attebery, C. L. Cochren, Jim Mock, J. O. Epperson, I. H. Grubbs and Cephus Moore – men who believed “That the trial of your faith, being much more precious than of gold that perisheth, though it be tried with fire, might be found unto praise and honour and glory at the appearing of Jesus Christ.”

Special praise should be given to T. L. Freed, who for over 30 years did the janitor work, Naomi Bailey, organist for 42 years, and Arthur Drake, who was Sunday School Superintendent for 30 years.  Much of the upkeep on the church was taken care of by the Ladies Aid and in later years by the Intermediate Boys class.  The basement has been refinished with knotty pine by the Married Peoples Class and only this year we covered and painted the church.

To us, the story of the Elmer Christian Church is one of the most beautiful ever written.  People working together to build and keep their place of worship – both old and young sharing the load.  It seems we can hear the voices of those present and those departed saying, “For we know that if our earthly house of this tabernacle were dissolved, we have a building of God, a house not made with hands, eternal in the heavens.”

Over the years many improvements have been made. New siding, water, bathroom, kitchen, classrooms in the basement, the upstairs ceiling has been lowered and walls paneled, some carpeting, central heat and air conditioning.

The steps that entered the church from the south have been  changed to the east.  The ministers for the past 25 years have been Brothers Larry Beaverson, Howard Merchant, Laurence Bridgewater, Russell blender, Danny Camp, D. A. Drake, Roy Worsham and Kenneth Garnett.  Brother Garnett is the present minister and has been over for over eight years.

Naomi Bailey was the pianist for 65 years, Mary Rhoads has been pianists for the past few years.  Larry Fletcher has been the Sunday School Superintendent for almost 30 years.  Mrs. Jennie Ellen Miller is the oldest living member. She was 103 years old on April 8, 1985.  Mrs. Miller is a resident of the La Plata Nursing home.  Mrs. Miller, Agnes Sadler, D. A. Drake and Naomi Bailey have all been members more than 70 years.  Sunday School and church worship are held each Lords Day.  After 75 years the doors are still open for anyone to worship at the Elmer Christian Church in Elmer, Missouri. 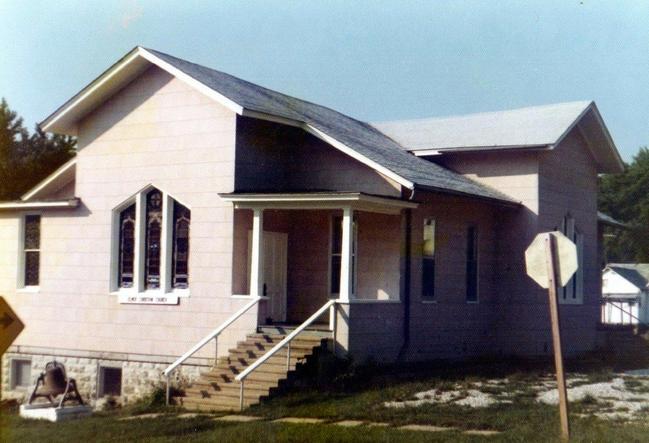