(Reprinted from the History of Macon County, 1910)

Like Freedom's battle in human history, when once begun and ' bequeathed from bleeding sire to son, though baffled oft is ever won, ' the course of the empire in this country, through the onward surge of the pioneer wave, has made steady progress by the successive advances of one generation after another, until it has redeemed our whole wilderness from the waste and covered our whole wide expanse with thrifty, progressive and prosperous people. This continued migration of hardy adventurers with the progress of the sun, from the Atlantic seaboard toward the Pacific coast, forms one of the most inspiring and spectacular images of all our chronicles. Almost within the memory of men yet living it was checked by the Ohio; then by the Mississippi; then by the Missouri, over whose triple source the Rocky Mountains frowned with forbidding severity. But the army of axmen and plowmen kept pushing their progress fast on the heels of the flying buffalo, the sons taking up the march where the fathers laid it down, until having overspread the country, and thus accomplished its mission, it passed into history and became but a memory, yet a vivid one, and kept alive and green by the triumphs of civilization and mighty achievements for which it blazed the way.

The family to which Edwin I. Dunham of Elmer in this county belongs,

and of which he is a worthy representative, embodies in its own an

epitome of our country's story in this respect. Its American

progenitors settled in New Jersey in 1680, emigrating to that state

from North Cumberland county, England. They flourished there as

conquering frontiersmen, as the first generation of their descendants

did in southeastern New York, and the next in the wild luxuriance of

the Mohawk valley. Western Pennsylvania bowed in subjugation and

yielded tribute to the third generation, and the unbroken prairies of

Indiana to the fourth, as did those of Iowa a little later, to the fifth.

farmers, helping to build into beauty and systematic productiveness

the region in which they camped and afterward dwelt in comfort.

Edwin I. Dunham, however, was a pioneer, but never sought the kind of conquest his forefathers made illustrious in the earlier history of the family. By the time he came upon the scene of action we no longer had a frontier, and he took his place in the work of developing and improving the country those before him had opened to settlement. He was born on January 24, 1866, in Louisa county, Iowa, a son of Sylvanus and Mattie (Jamison) Dunham, the former a native of Indiana, born in 1822, and the latter of Ohio and of North of Ireland ancestry. The mother was a daughter of William and Elizabeth Jamison, who, also, were born and reared in Ohio. The Dunhams were married in January, 1865, and had nine children, two of whom died in infancy. Those living are : Edwin I. ; William W., of Fredonia, Kansas ; Harry A., of Wapello, Iowa; Sylvanus V., of Montevista, Colorado; Nellie Ursula, the wife of Frank G. Colburn, of Oskaloosa, Iowa ; and Elmer R. and Fred, who also live in Iowa, the latter at Wapello.

The father moved from Indiana to Louisa county, Iowa, in 1837, when he was but fifteen years of age. He was industrious and thrifty, and had a great deal of enterprise and business capacity. He became in time the owner of over 3,000 acres of land and one of the leading stock men of his day in the Northwest. Owing to his extensive operations in raising and dealing in livestock, and his general ability and high character, he rose to consequence in his section of the state, becoming, in fact, the most prominent citizen in the portion he lived in. He died on September 4, 1902. His widow is still living and is now (1909) sixty-eight years old and has her home at Wapello, Iowa.  Edwin I. Dunham attended the district schools in his native county, and on completing their course of instruction, entered a good high school. After the completion of his scholastic training he taught school for a period of three years, then followed contracting and building for awhile in Salt Lake City. In 1890 he returned to Iowa and took up his residence at Oakville in the county of his nativity. There he dealt in cattle until 1896, when he became a retail druggist. In compliance with the state law he made a special study of his business in technical and practical training, taking his instructions from a private tutor and securing his registry in 1900. He found his new mercantile connection agreeable and full of stimulus for him, and stuck to it faithfully until 1905, when the utter failure of his health compelled him to give it up, and seek a more congenial climate and an outdoor life. He then came to Missouri and located at Elmer in this county. Since his arrival in this locality he has been energetically and extensively engaged in farming and raising stock, and has been very successful in both.

Mr. Dunham now owns 500 acres of choice land and cultivates all of it except what is required for grazing purposes. He feeds and ships large numbers of cattle every year, and prepares liis output from the very beginning of his work on it with the greatest care and intelligence. For this he has ample reward in the rank his shipments have in the markets and the high prices they bring. His business is large and makes exacting claims on his time and energies. But he does not allow it to wholly absorb him or lessen his interest in the affairs of the township and county. In everything pertaining to their welfare he takes an earnest interest, and in all worthy projects for. promoting that he bears an active and serviceable part. He was reared in the Republican school of political thought. For, although his father was not an active partisan and mingled but little with political affairs, he was a loyal Republican. His son's convictions, started by the father's views and opinions, have been strengthened by his own reading, observation and reflection, and he is as active in the service of his party as his father was loyal and firm in his faith in it. His prominence in its councils and zeal in working for its success have brought him prominently before the public, and in 1908 he was a drafted candidate for membership in the lower house of the state legislature.

In 1903 he was made president of the school board and served with great energy and intelligence in that capacity for three years. The value of his services is shown in the efficiency of the schools and acknowledged by the universal esteem in which the people hold them and him. Fraternally he is a member of the Masonic Order, the Independent Order of Odd Fellows and the Modern Woodmen of America, and is active in his service of each. In 1896 he was united in marriage with Miss Melissa Miller, a native of Iowa and daughter of Jonas and Mary Magdalene (Fry) Miller. Two children have blessed their union, their daughter Ursula and their son Robert, both of whom are attending school. The parents are social favorites wherever they are known, warmly welcomed in the best circles of society and brightening and warming them with their genial natures, cultivated manners and broad general intelligence. In connection with local progress and improvement they are considered as among the most useful citizens of the township, and in all the relations of life they stand in the front rank in general popular estimation. 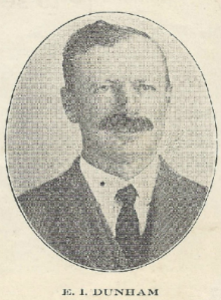