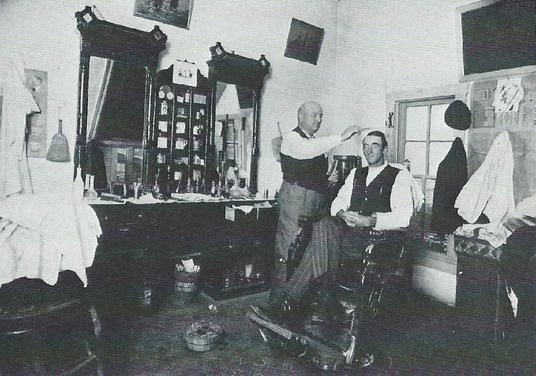 In the picture above, Uncle Tommy is cutting the hair of Willie Agee, who owned and operated Agee's Hardware. The picture was taken in 1909.

T.F. did not come to Elmer until 1901 when he opened a barber shop and shoe repair business.  But he passed through the area on September 20, 1883, along with four other covered wagons which were all headed to near North Salem in Sullivan County, Missouri. They stopped in Mercyville to buy supplies for the final three days of their journey, which had begun on August 31 at Morrovia, Indiana.

His first shop was located where Allen’s gas station now stands. Later, a second shop was built about where the Fire Station is today. He was also a preacher and tried to start a church at one time. Some meetings were held in the old store building east of Main Street and south of Burbon Street in Mercyville. He was Justice of the Peace from about 1902 until 1906. He married several local couples and recorded the dates.  He retired in 1929 and then married Mary Griffen, widow of Will Griffen.

Of his four children, Pearl married Ms. Edna Harmon and moved to Cushing, Oklahoma, in the late 1920’s. He worked as a laborer on the Santa Fe section in Elmer and Oklahoma until his retirement. Ralph married Ms. Mary Atteberry, and was a carpenter and Elmer Postmaster from 1924 until 1932. He was part owner of a gas station with Rochel Hughes in the late 1930’s and a carpenter again with Dan Herrin in the 1940’s and 1950’s.  Nellie Johnson was the Post Office clerk from 1924 until 1932 and again from 1946 until 1971. Archie was a farmer, school janitor and laborer around Elmer.

Sam Parker - Before Mr. Johnson retired, another barber shop had opened in Elmer.  Sam Parker arrived in Elmer in 1919 and bought a barber shop that was owned by Tom Flynn. Sam was taught the skill of barbering under W. L. (Tuffy) Thomas in Bevier. Before becoming a barber, he worked in the coal mines at Bevier for ten years.  He then barbered in Bevier for four years before moving to Elmer. He opened his shop on April 17, 1919, and remained in the same building (owned by Tom McDavitt) for forty-one years.  Sam was an avid St. Louis Cardinal fan and his customers got to share that love since every ballgame was loudly played in the shop if the Cardinals were playing.

Sam and his wife Pearl were married in 1914. When they came to Elmer, there was only one empty house in town – a little house that stood where the Assembly of God Church is now located. Also, every building in the business district was occupied.  Pearl remembers Elmer when it was booming in the 20’s and 30’s. That’s when the bootleggers were going good. Most every Saturday night the sheriff was called, then the streets were cleared.  Barney Williams was the sheriff for a long time. She also remembers Sam cutting Pretty Boy Floyd’s hair and how nervous he was when he found out who his customer was. Another memory is Hop Perry shooting out the light in the barber shop.

Pearl worked for nine years in Drake’s Store and four years at Stampers in Macon. She was also the Elmer news reporter for the Macon Chronicle Herald for twelve years.