(Reprinted from The Elmer JOURNAL, 1910)

In this day and age of commercial activity, every city big or little must through necessity have a Bank.  As the town is a business center of the community, so the Bank is the medium through which that business goes.  It is the great artery which supplies the so-called blood or medium of exchange, known as money,  By having the money in the vaults of a Bank it can be made to do more work for the people who must use it in their business or in other words it must not be allowed to scatter too much or it will disappear from the community and bring hard times: hence, the necessity of the Bank.  \

Elmer has such an institution known as the Elmer Exchange Bank which by the way is an excellent medium for you to do your business through.  The officials of this Bank are safe yet conservative and accommodating as far as the Safe Guard, which Laws of the State throw around all banks within its confines, will allow.  The business done by the Exchange Bank of Elmer is growing as the institution grows older and its gentlemanly and accommodating Cashier, Mr. A. F. Smith is a tower of strength for the stockholders.

Usually speaking, the active officers of a Bank, the President and Cashier are all that is known to the business world, but those closer at home usually know the stockholders  a swell and measure the comparitive safety of the same by these known honesty and financial worth of the stockholders.  The Exchange Bank certainly has a strong Board of Directors to manage its business policy.  With J. M. Surbeck as president, Hemmit Dale, Vice President and A. F. Smith, cashier the following well known gentlemen to direct them, there need be no hesitancy at all in placing your funds in the bank's hands for safe keeping: J. M. Surbeck, Hemmit Dale, A. F. Smith, J. E. Patterson, G. W. Anspaugh.  The capital stock of the Bank is $10,000 with a nice surplus to its credit.  It is organized and works under the state laws and has the confidence of a large patronage. 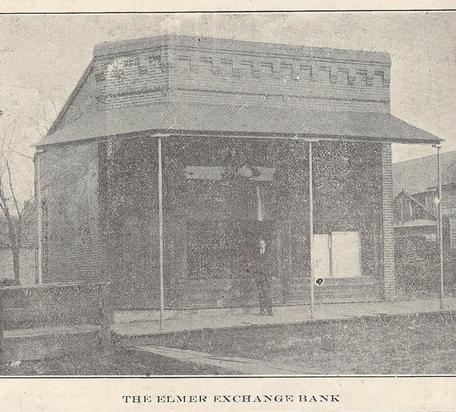