Elmer baseball team, circa 1941. What started out as a basic "town team" went on to become state and tri-state champions

By Amy Mock and Jim Kline

Baseball meant a lot to towns of Northeast Missouri.  The rivalries between towns were sometimes so intense that the games often led to gambling and fighting among townspeople and players.  Some of the towns in Missouri that had teams were Trenton, Chillicothe, Graysville, Richmond, St. Joseph, Kirksville, Elmer, La Plata, Macon, Brookfield, Fulton, Sedalia, Carrollton, Memphis, Kansas City and St. Louis.

Many of the teams in Missouri also played out-of-state teams.  For instance, the Elmer Panthers played the Chicago Stars, the Toledo Hens from Iowa, the Cincinnati Buckeyes, the Texas Seals, the House of Davids, members of a religious cult from Michigan, and the teams from Lenexa and Wichita, Kansas.

It was easy for the bigger towns that belonged to more extensive leagues to organize teams and games than it was for smaller towns which had to organize on their own.  One of these small town teams was the Elmer Panthers with Walker Tate as the coach and manager.  Owner of the Elmer Café, Tate used his business as a base for communication with other team managers to plan games.  He also organized games by telegraph, telephone, mail and sometimes by traveling to the opponent’s towns to set up the games.

Semi-professional teams did not have owners, but the teams had 3xpenses which were sometimes major.  For instance, the cost of a baseball during the 30’s and 40’s was $2.00, a bat would cost $3.65, and a glove would cost about $5.00.  The only players that received payment to cover these expenses were the pitchers.  These paid players along with the rest of the team members provided their own transportation.  Sometimes the players were given equipment by the managers of their team; otherwise, the players paid for their own equipment and uniforms.  Steve Buban, part-time pitcher for the Panthers, said that he charged from $30 to #150 to pitch a game.  The teams he pitched for usually paid him to play so that they would have a sure chance of winning.  The more a team needed a win, the more they were willing to pay for good players.  Buban was said to be such a talented pitcher that many of the other players and fans thought that he would go into professional baseball.  H refused the offers, however, because he was receiving a good amount of money pitching semi-pro ball and made good pay from his job at the shoe factory.

The Elmer Panthers were one of the best teams in the area during the forties, and at one time they had a record of 33 straight wins.  Some people thought they were the best in the state, even better than the “big city” teams.  The Elmer team consisted of mostly local players, with a few from nearby towns.  Bernice Mock, who was catcher for the team, also played for the Kernels from Mitchell, Nebraska, in the minor leagues.  Other members consisted of Albert Sadler, Ray wood, Ernest Bailey, tootsie Hulse, Clay Franks, Harold Elliott, Harvey Bellfield, Harold Pullam, Harold Woods, Leonard Herrin, and many others.  The fans’ pride and confidence in the Panthers led to gambling.  The bets were sometimes large, depending on the teams that played and who played for each team.  Although the players were confident, they didn’t tempt fate.  They indulged in superstitions to keep their luck from going away.  Some players were their ball caps a certain way, and some didn’t wash their uniforms for fear the luck might be washed out.

Old timers recall an incident in one of the Panther’s games involving Clay Franks and Bernice Mock in Joplin.  The Joplin team had hired a pitcher from the Pittsburgh Pirates, a professional team.  The game was scoreless until the top of the ninth inning when the Panthers were up to bat.  Nervous about the new pitcher, Franks called a time out.  Franks knew that one run would win the game for them, so he told Mock, “He’s gonna give you a fast ball, so I want you to swing from the ground up and hit the middle of that scoreboard behind center field.”    Mock tensely buckled up, the pitch was thrown, and Mock hit the ball into the middle of the scoreboard.  Needless to say, the Panthers won the game.

Clay Franks was involved in another game-clinching play when the Panthers played the trustee team at the Jefferson City Penitentiary.  The Panthers were behind by three with bases loaded in the top of the ninth inning.  Franks was up to bat, and he knew that it was all on his shoulders to make the runs.  The pitch was thrown, and Franks hit a home-run out of the park.  He was later told that the only other man to do that was Stan Musial of the St. Louis Cardinals.

The Panthers played a lot of games in penitentiaries, not only at Jefferson City, but Leavenworth and Fort Madison.  Albert Sadler said that many times prison officials paid the teams that played in the “pens.”  One time, during a game at the Jefferson City Penitentiary, Albert Wood broke his leg while sliding into second base.  The prison doctors immediately set his leg, and he was able to leave after the game.

Puerto Rico wasn’t the toughest team Elmer played.  Two of the best teams they played were the Kansas City Monarchs and the St. Louis Giants.  Both of these teams were members of the Negro League, which was a separate professional division.  The Negro teams not only played each other, but also the semi-pro teams.  Many of the players on the Negro teams later advanced to the major leagues and became legendary baseball players, which was a great blow to semi-professional baseball because of the loss of competition leading to the loss of popularity.  Some of the great talents were Jesse Owens, Satchel Paige, and Jackie Robinson, all of whom played for the Monarchs.

At one time, Jesse Owens had his own baseball team.  When they played Elmer, according to Albert Sadler, Owens claimed that he could “outrun any man alive.”  Taking this as a challenge, Steve Buban proposed a race.  Owens set the terms: He would start at second base, and Buban would start at the pitcher’s mound.  The first one to reach home plate would win.  After the race, Buban was convinced that Owens’ claim was true.

A major event that adversely changed the pace of semi-professional baseball was the United States’ entrance into World War II.  Many of the Elmer players were drafted into the service, including Steve Buban, Leonard “Stretch” Herrin, Harold “Lefty” Elliott, and others.  The war was the most effective factor in the decline of the interest in semi-pro ball.  For a few years following the war, some of the teams regrouped and made a semi-successful attempt to reestablish the strong popularity they once knew.  The teams prospered for a while, but interest soon faded, and the teams had disbanded by 1948.

Perhaps semi-professional baseball’s popularity declined because fans lost interest.  The 1940’s were a time of economic troubles, and one of the things that was inexpensive and available was the gasoline needed to go and watch a game.  After the war, the economy improved and society became more quickly paced.  People found less and less time to watch semi-professional baseball, and the greater amount of money they were receiving brought better types of entertainment for them.

Semi-professional baseball may be gone, but it has not been forgotten.  Memories of the exciting games, talented players, and great seasons are vivid in the memories of those who played or just watched the unforgotten sport. 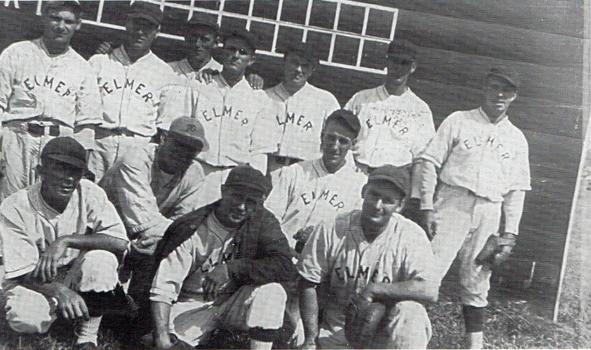