Early in my teens Fred Laffin would take me fishing at the Chariton River south of Elmer.  Since he never owned a car, we’d walk the dirt road beside the railroad tracks to the river, he with a giddy-up gait, me panting most of the way, listening to his chuckles at my lagging behind.  I knew he was just showing off that an old man could out-walk a young whippersnapper.  Though this World War I veteran rarely had much to do with adolescents beyond conversations, for some reason I was the only one of his nephew's boys he'd take fishing.  I'll never forget how privileged I felt to go fishing with him.  However, unlike Joseph's brothers, mine didn't sell me into slavery for all my bragging.

Most of the particulars about those fishing trips with Uncle Fred are forgotten, but a fishing trip with Roy Warren remains vivid in my mind.  Why I took this blind man fishing came about when I offered to mow Mr. Warren's yard.

"Need your lawn mowed?" I probably asked, after walking through over-grown grass in the yard.

"How much do you charge?" was a response I often heard. It was usually the wife asking.

I would shrug my shoulders or respond, "I don't know; whatever you think."  There were some folks who'd take advantage of that sort of reply, but then one would be silly to complain that their thinking a quarter was a fair wage.  After mowing a few yards for a quarter, I stopped inviting them to think about whatever.

"Sure," I replied in an ambivalent tone, hiding my glee and the urge to leap for joy. Back in the 50’s the going rate for mowing small yards like the Warrens' was fifty cents.  Anyone who offered you a dollar was said to be a Democrat; at least that's what Dad thought.

No doubt while I was interviewing for the yard job with Mrs. Warren, my small-talk included my fishing trips with Uncle Fred; I spoke of them often to older folks who needed to hear my boasting.  It was instant integrity by association--giving folks the impression I was such a good boy for hanging around with people of positive influence.  Fred Laffin was known as a man of lofty principles, and also happened to be a member of the church the Warrens attended, another plus.

In addition to our fishing trips, my recollections of Uncle Fred were the times he'd throw his apples over the fence for me to catch, which I often didn't; his strolling to town wearing a flat-rimmed military hat, which he always removed along with his pipe in the presence of ladies.  Most days you'd find him with other old men at the Buzzards' Roost sharing the latest goings-on in the world.

Fred Laffin repaired radios, and for a time he was the owner of the movie theater in Elmer.  He was also the town's shoe cobbler who chided the teenagers for calling their heel plates "heel taps."  To teenagers the heel plates had little to do with reducing the wear on their shoes. They were among the implicit symbols of the adolescents' romantic prowess: fledgling Romeos thundering into town, announcing their arrival with a blast of the glass-packs before cutting the engines of their spotless '57 Chevys.  They would then strut along the sidewalk making tap-dancing sounds while combing their duck-tails.  All designed to impress the girls.

Apparently Mrs. Warren assumed from my association with Uncle Fred that I didn't go around with a pack of Camels twisted up in my shirt sleeve or mingle with those who did, (though in fact, I did).  She made me an offer I couldn't refuse.

"I’ll pay two dollars if you mow our yard and take my husband fishing.”  That not only had a poetic cadence to it, it sounded very profitable.  How difficult would it be to lead a blind man to the river?

The Warrens lived west of the tracks south of the blacktop road that went through Elmer.  Since Dad insisted that the Democrats lived east of the tracks, I didn't know how to tell him he was wrong.  There were Republicans living west of the tracks who didn't "muzzle the ox."  From all his scripture quoting dealing with the rich and poor, there was a time in my youth when I believed God was a Democrat, that the Bible stumped the trickle-up effect, and, if you didn't think FDR was the greatest thing since sliced baloney, you were fuel for the fires of hell.

"They'll burn in hell for. . ." he'd say for whatever Republicans did back then.  I envisioned their contorted bodies writhing in agony midst the flames. My being the victim of those hell-bound Republicans sounded good, too, the times he found out that I had mowed a yard for a quarter.  However, he knew that many of these people west of the tracks paying a quarter had yards the size of a postage stamp--a deliberate omission from his diatribes.  I never told him about Mrs. Warren's generous offer and my subsequent windfall profit.  He went to his grave not knowing that there was at least one Democrat family living on the wrong side of the tracks.

"I haven't lost my hearing yet," Mr. Warren said, chuckling light-heartedly at my talking to him as if there were a passing train when there wasn't.

"Sorry!  That was stupid of me," I said when he only chuckled at the one and only time I told him how far we were walking from the ditch.

”Never led a blind person before, have you?"  he kindly replied.

"All I need is someone to hold on to. I'm leaving the rest up to

you."  From my conversation with Mr. Warren that day, I

discovered that his blind world was not unlike families that had

no blindness.  He ate his meals with his wife; and like all families,

they couldn't see the future as well as the politicians. But in

reality, most folks knew there weren't enough chickens back

were, or that people like Roy Warren and Uncle Fred didn't need

trip wasn't because of the two dollars Mr. Warren himself paid

me when I took him home, and to this day I cannot figure out

five-dollar bills mingled together in his wallet.  There was more at stake for this young teenager who didn't have heel taps but used crushed soda cans instead.  Neither did it have anything to do with my not treading on Dad's political notions long before he voted for Richard Nixon in '68.

Dad never challenged my fish tales the times I went fishing with Uncle Fred, though lookingback on it now, his smiles meant he knew all along I was making myself out to be such a great fisherman.  Unlike Uncle Fred, who apparently did not like eating fish, Mr. Warren kept those fish he caught that day. 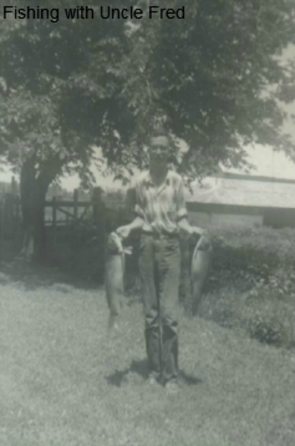