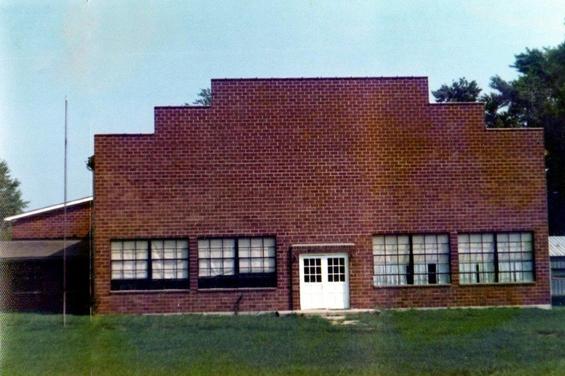 (Reprinted from the Macon Chronicle Herald, circa 1954)

A record-breaking feat of the citizens of a small town organizing and erecting an $82,000 school building without issuing bonds or raising taxes was accomplished last spring by nearby Elmer with a population of 228, and its surrounding community. Never before in the history of the public schools of Missouri has any school district other than the Elmer Consolidated Schools been able to point to the accomplishment of building a large auditorium as well as several classrooms entirely from donations both in money and labor, and it may never have been accomplished throughout the nation.

The amazing story all began several years ago when the district was in danger of losing the school altogether because of lack of proper facilities to meet state regulations as well as shortages in units of study offered in the school. Overcoming state difficulties still didn't ease the movement by an interested group of citizens and the ball really got rolling in 1951, when those of the community who were interested in the project called an organiztional meeting which was well attended by the business men and farmers of the area.

During this meeting Rev. Floyd F. J. Buntenbach was elected general chairman of the program and a building committee, finance committee, publicity committee, program committee, and a secretary and treasurer were set up during the meeting which started the real organizational action. In a short time the committees met and decided to call a mass meeting of the area to introduce to the community as a whole that was hoped to be accomplished as well as to open the initial drive for funds for the planned-for building.

Ready for presentation to all who contributed was a bond so worded as to protect the donors in the event that enough money couldn't be raised to carry our the plan.  The bond was a receipt and a "thank you" for the donation: however, it did guarantee that all money
would be refunded within one year of the date issued if the building was not erected.

The mass meeting proved very successful with nearly $10,000 raised during the first evening, and a wave of enthusiasm was set off that promised to be the big bolster to the program. Six months later in the early spring of 1952, construction on the new building got underway and from the beginning to the finale volunteer workers carried out the entire construction of the structure.

D. T. Herron of the Elmer community and a well-known builder took charge of the construction and was assisted with the supervision by T. L. Freed.  However, according to officials of the committee, every man of the community seemed to be present at some time or another to help with the construction.

Only a part of the needed money has been raised at the time of the beginning of construction and it was necessary to continue money raising campaigns.  The women of the community put on one sale after another, from potluck suppers to auctions.  Local merchants, the P.T.A. and various others sponsored benefit programs, and the finance committee added to their already heavy tasks by sponsoring dinners and socials of various types. Although most of the credit for the building mus go to the community residents, the State Department of Education came through in a pinch and donated $5,000 on the addition.

The new building was completed suitable for use in April of this year and the commencement program for last spring's graduation was held in the new auditorium, which is also convertible into a regulation basketball court, is the first inside court for the school in its history. A plaque bearing some 250 names of donors on the building is being placed in the corridor of the auditorium in their honor and as a proof to the community that dreams can come true with co-operation and lots of hard work.

The hard-worked-for construction is 108 feet by 60 feet in size, and is build of rugged faced telestruck with snow white mortar joints.  At intervals of 12 feet are the pilasters supporting the 20 foot walls. The front section of the building is divided into two classrooms for home economics and typwriting classes.  According to officials of the school both rooms are equipped with the most modern equipment.

The remainder of the building is devoted to an auditorium with a large seating capacity, along with the modern gymnasium.  A stage finished in knotty pine and dressing rooms equipped with toilet and showers are built on the side of the auditorium adding another 20
feet by 46 feet to the building.  A balcony has been built over the two classrooms to increase the seating capacity even further and another class room of similar proportions as well as a new music room is being planned for the building.

Glen Cain, superintendent of schools, pointed out that 11 units of high school work have been added to the system, known as the Elmer Consolidated Schools, in the past five years, including the home economics department and a modern radio and physics department. The school had been operating in the old building, which is still in full use since its construction in 1904-05.

The following paragraph sums up the students viewpoint on the accomplishment as it was taken from a theme entitled, "How Our Dreams Came True," written by Wanda Howerton, a junior in the Elmer School.

"I, as a student of Elmer HIgh School, have been fully convinced that when a body of people work together towards one certain goal and have enough determination they will finally succeed.  Because on this fourth day of November, 1953, the new building is
completed, only because of the determination and generosity of the good people, now only of our community but also of our state. 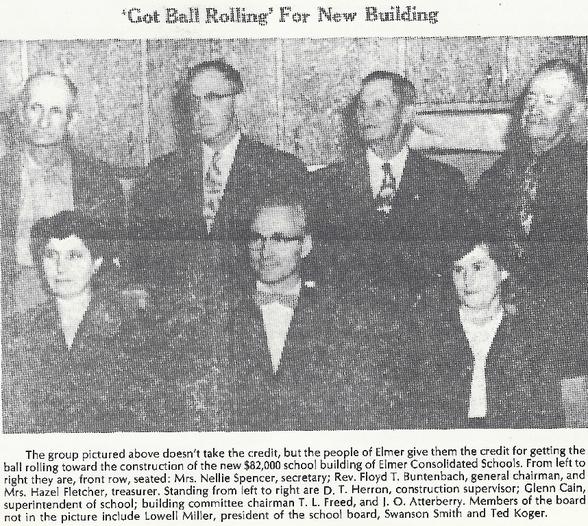