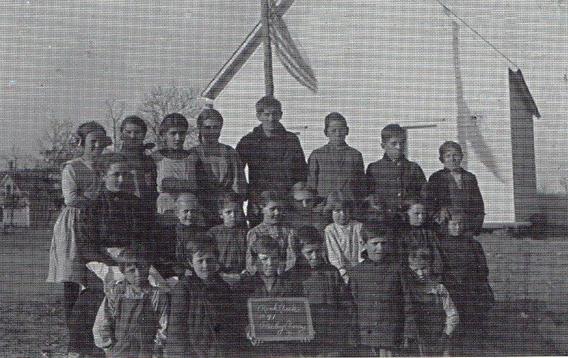 Rock Creek School was taught by Ethyle Hackler in 1916 and the following students were enrolled.

(picture is used via the courtesy of Mrs. Mary Thayer Eaton)

Ruby Cherry with her students, at the Rock Creek School #41, circa 1910

​This school was located on State Highway HH, south of Elmer. Dates of operation are unknown; however the building was used for a number of years after the school closed for community events, reunions, basket dinners, etc. as late as the 1980's.  The school also served as the location for the first fox hunt sponsored by the Chariton Valley Fox Hunters Association. To the author's knowledge, the building still stands.

Rock Creek was the first school in the northwestern part of the county. In the year 1850, a new master came to teach the school. He was from Indiana and introduced culture training or manners along with writing, spelling, reading and arithmetic.

All the boys were taught to remove their hats immediately upon entering the schoolroom and to greet the teacher. On Friday, the teacher divided the boys and girls, lined each according to age on their side of the room. Then, at the signal, the head boy would take the head girl and introduce her to all of the other scholars (they weren't called students at that time). Then the next boy would take the next girl and proceed in the same way until everyone had been formally and correctly introduced.

​That year the school had only spring and summer term, because no method of heating had been provided. The building was of logs with earthen floor and two openings in the south doors. The roof was of slabs and the seats were split logs. However, four years later, a new school house was erected, which had one window, a brick chimney and a fireplace. That year, a winter term was taught bgy Rev. Nick Langston. The following year, Wm. A. Mathis became the teacher and algebra, philosophy and astronomy were taught. This is the only record of the teaching of the last two subjects in any of the early schools of this county.