(Reprinted from The Elmer Journal, 1909)

Samuel L. McDavitt was born near the old town of Mercyville, Macon County, Missouri, on July 30, 1876.  His boyhood days were spent on the farm. At the age of 17, he began attending the Kirksville State Normal School and quit school after the third term.  In 1896, October 9, he started for Portland, Oregon, there to  join his brother, B.W. McDavitt, who was travelling in the state of Oregon.  Upon his arrival at Portland, he was named “Missouri” by the boys of the Company

he was to travel for.  The remark, he found in after life, was meant to be a

joke; however Sam always claimed that being a Missourian was one half

of life’s success and ambition.  The other half was in being determined to

foundation for the conception of their duty to community, state and

ashington, British Columbia and Canada from town to town, thereby

aining a thorough knowledge of all that country.

He was first employed as solicitor for the Chicago Portrait Company

under the management of Mr. E.A. Evans and after his brother, B.W. was

promoted in 1897 to district or state manager of Washington and B.C, Sam

as promoted to collector and delivery man which position he held until his resignation, when her brother and himself with others started in business.  During the year 1901 by mishap, a fire wiped out their plant, which was located in Seattle, Wash.  Sam returned to his old home for a short visit in 1903, but as the I & St. L railroad was being constructed, he decided to stay at home that year and after selling his interest in some stock entered the general merchandise business in Mercyville.  In 1905, he sold to T.W. and B.W. McDavitt, preparatory to a return to the West, but the persuasions of his folks and others, he settled down in Elmer, Mo., and started writing insurance, land selling and general hustling business.  He now enjoys the pleasures of his own home, having married Miss Effa D. Enterline, November 1, 1908, shortly after which time he moved to Elmer, Mo. And we may say kept his tongue busy for his many patrons. 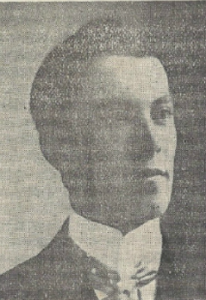