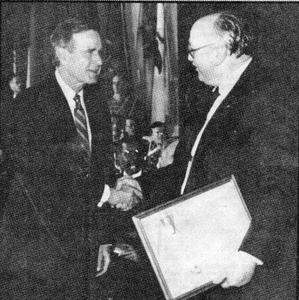 A former Elmer resident was one of a select group of senior executives to receive the federal government’s highest honors in 1989. On June 29, President George Bush presented the “Distinguished Executive” Award to Willis E. Greenstreet. The award recognized Greenstreet’s highly distinguished career, particularly in service to the U.S. Environmental Protection Agency (EPA).

He is currently director of EPA’s Office of Administration

where the agency maintains a large center for research,

has been marked by an outstanding ability to build productive

management teams and to develop the governments rapidly

expanding move into information services. “To explain what

I do for a living, I say I’m a management consultant to

Greenstreet is the son of Letha and the late Eugene Greenstreet

of Elmer. He attended Elmer schools and graduated in the class

of 1955 from Elmer High School.  After his high school graduation,

Greenstreet attended Northeast Missouri State University in Kirksville. He received a bachelor of science in education degree from the university in 1963.

“I went to Kansas City to take a test for the government. I had no idea what I was getting into,” he said. “My teachers didn’t even understand what is was for.” He passed the test and it earned him a job with the Federal Aviation Administration (FAA) in Washington, D.C., beginning right away in 1963. Greenstreet remained with them until 1965. In 1965, he began to work for the U.S. Postal System, remaining until 1971.

From the postal system, he moved to the EPA. From 1971 to 1973, as deputy director of EPA’s National Environmental Research Center in Cincinnati, Ohio, Greenstreet helped lay the groundwork which brought that organization the President’s Management Improvement Award in 1974. As assistant regional administrator for planning and management at EPA’s Philadelphia Regional Office from 1973 to 1975, he spearheaded a number of important management improvements ranging from financial systems to employee morale.

As director of EPA’s Information and Data Systems Division from 1975 to 1979, Greenstreet helped set the agency’s course in information management. He led efforts to establish the National Computer Center  in Research Triangle Park, N.C., recruited top talent and began a systems modernization program which boosted EPA’s ability to provide essential computing support to its environmental programs.

From 1979 to 1983, Greenstreet served as the first director of administration for the Merit Systems

Protection Board and as the director of the Office of Federal Inspector – which was established to oversee the construction of the Alaska Natural Gas Pipeline. In both organizations, he played a vital role in setting up organizational funding, staffing, administration processes and field offices.

In 1983, Greenstreet returned to EPA to help restore confidence in the agency’s administrative and management programs. Initially, he worked to modernize EPA’s information systems and in 1984, was named director of administration at the Environmental Research Center in Research Triangle Park. He again exhibited strong leadership in improving administrative support operations and consolidating national finance and data processing functions at RTP.

Greenstreet received the federal government’s “Meritorious Executive” Award in 1987 for his continued outstanding contributions in public service.  “I have enjoyed all my jobs,” he said. “It is very exciting and interesting to work with the government in a controversial job. With the EPA, environmentalists say we don’t do enough and industry says we have too many restrictions.”

Greenstreet returns to the Elmer area once or twice a year to visit his mother and a brother, Franklin Greenstreet, who still resides there.