Main Street, Elmer, Missouri (circa 1900) looking west toward the railroad tracks. An Opera House and several business offices were located on the second floor of the brick building on the corner. LEFT: A restaurant sign hangs in front of the second brick building. A Barber Shop, the Post Office, and other business firms were located in the remaining wooden structures, with offices above the two story structures. The tall IOOF hall was built of wood. The two story house across the tracks was the J. H. Miller home. On the NORTH side of the street, at the time, a grocery store, a Pool Room and Tate's Saloon can be identified. Perhaps the pile of wood near the tracks was for locomotive fuel. (Picture reprinted from Elmer Community History, 1976). 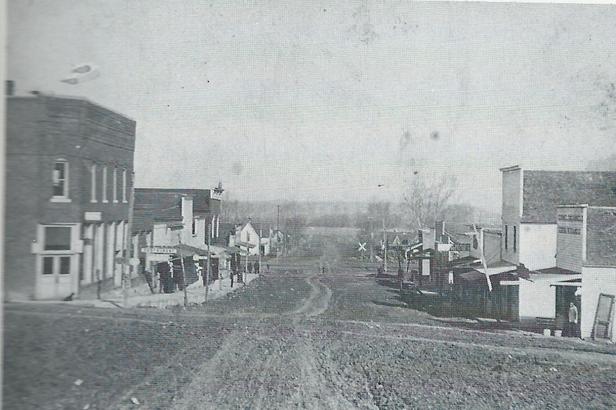 Third in a series of articles on the history of Mercyville & Elmer, Missouri (Reprinted from the August 18, 1993 edition of The Home Press, La Plata, Missouri)

By the early 1900’s, Elmer, Missouri, was a thriving railroad town.  Located along the newly laid Atchison, Topeka and Santa Fe Railroad, Elmer enjoyed the patronage of those travelling by train.  Because of the town’s prime location along this tracks, businesses were drawn to the community, pulling in an increased population.  Thus, Elmer began an upward trend.

The ATSF tracks were laid through Macon County in 1887. A depot was built and the town was surveyed and laid out immediately.  The depot was named Biddle Station, which eventually served as the heart of a bustling community.  When the area began to proper, the name of the town and the depot were changed to Elmer, since there was already a town in Missouri named Biddle.

Within two years after the lots were offered for development, Elmer was home to a growing business district.  That growth got an additional boost several years later, when Mercyville lost their rail service due to the closing and removal of the Iowa and St. Louis Railroad.  What little business remained in Mercyville transferred to Elmer.

By 1907, there were more than 50 businesses operating in Elmer.

Because Elmer was a “jumping off point” for the region, it soon became a hub for traveling salesmen.  Salesmen travelling via railroad would often work the northeast and northcentral Missouri area out of Elmer.  Salesmen relied on rented horses and wagons to reach the outlying areas, prompting a need for livery stables that could provide the transportation.  The salesmen and others who came to Elmer via the railroad also necessitated the establishment of such businesses as hotels, grocery stores, medical practices, general stores, etc.  The general population of the town established the need alone, but the influx of those who were travelling through provided the capital.

Thus, in 1901, the Elmer Exchange Bank was organized, with J.M. Surbeck as president and A.F. Smith as cashier.  The bank served the community for thirty years, closing its doors in 1931, when all assets were transferred to the La Plata State Bank.

The era of growth for Elmer seemed to be around 1907-09.  Properties with wooden buildings were selling for $6,000 to $8,000.  Area families were now confident in their town and were investing their futures in its success.